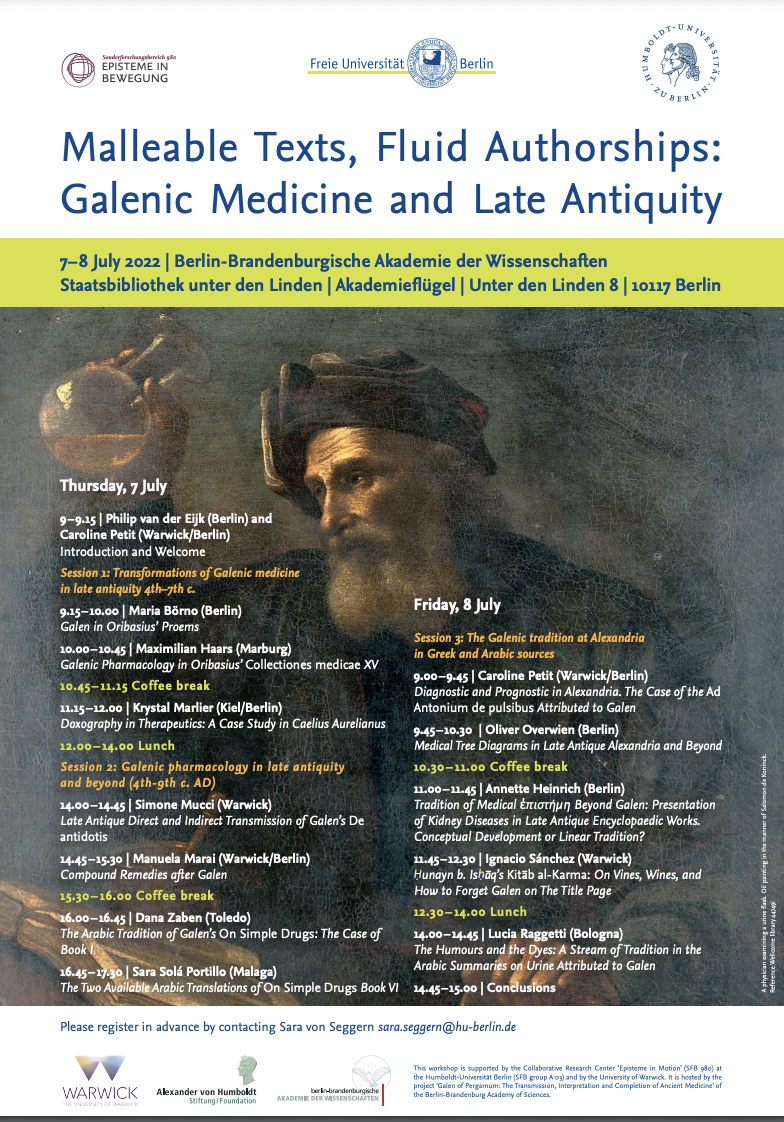 Workshop of the research project A03 “The Transfer of Medical Episteme in the ‘Encyclopaedic’ Compilations of Late Antiquity” of Collaborative Research Center 980 “Episteme in Motion” in cooperation with the Academy research project “Galen of Pergamum. The Transmission, Interpretation and Completion of Ancient Medicine” at the Berlin-Brandenburg Academy of Sciences and Humanities and the University of Warwick

Research on ancient pharmacological texts has increased dramatically in recent years. Several important projects and doctoral theses are underway, promising to deliver ground-breaking results in the next decade. In this scholarly context, various projects at the Humboldt-Universität and the university of Warwick seem to address converging questions on the changing nature of pharmacological texts across time and space. Authorship becomes more fluid, with the same text receiving various attributions; texts undergo changes of size, ordering, format, as they get adapted for new audiences. As texts become repackaged, manuscripts and papyri offer privileged evidence of those changes. Early translations of Greek works into Latin, Syriac and then Arabic result in epitomes and other reworked, shortened texts. Yet the transmission of ancient Greek pharmacology is often made difficult to apprehend due to missing links and medieval, fragmentary evidence. This workshop therefore proposes to offer complementary perspectives on those shifts, through communications on Greek, Latin and Arabic evidence. Themes that will be addressed include language, style, authorship, dating, transmission, manuscripts.

This workshop takes place in cooperation with the Alexander von Humboldt-Foundation, the Humboldt-Universität Berlin and the University of Warwick. It is hosted by the project ‘Galen of Pergamum: The Transmission, Interpretation and Completion of Ancient Medicine’ at the Berlin-Brandenburg Academy of Sciences.