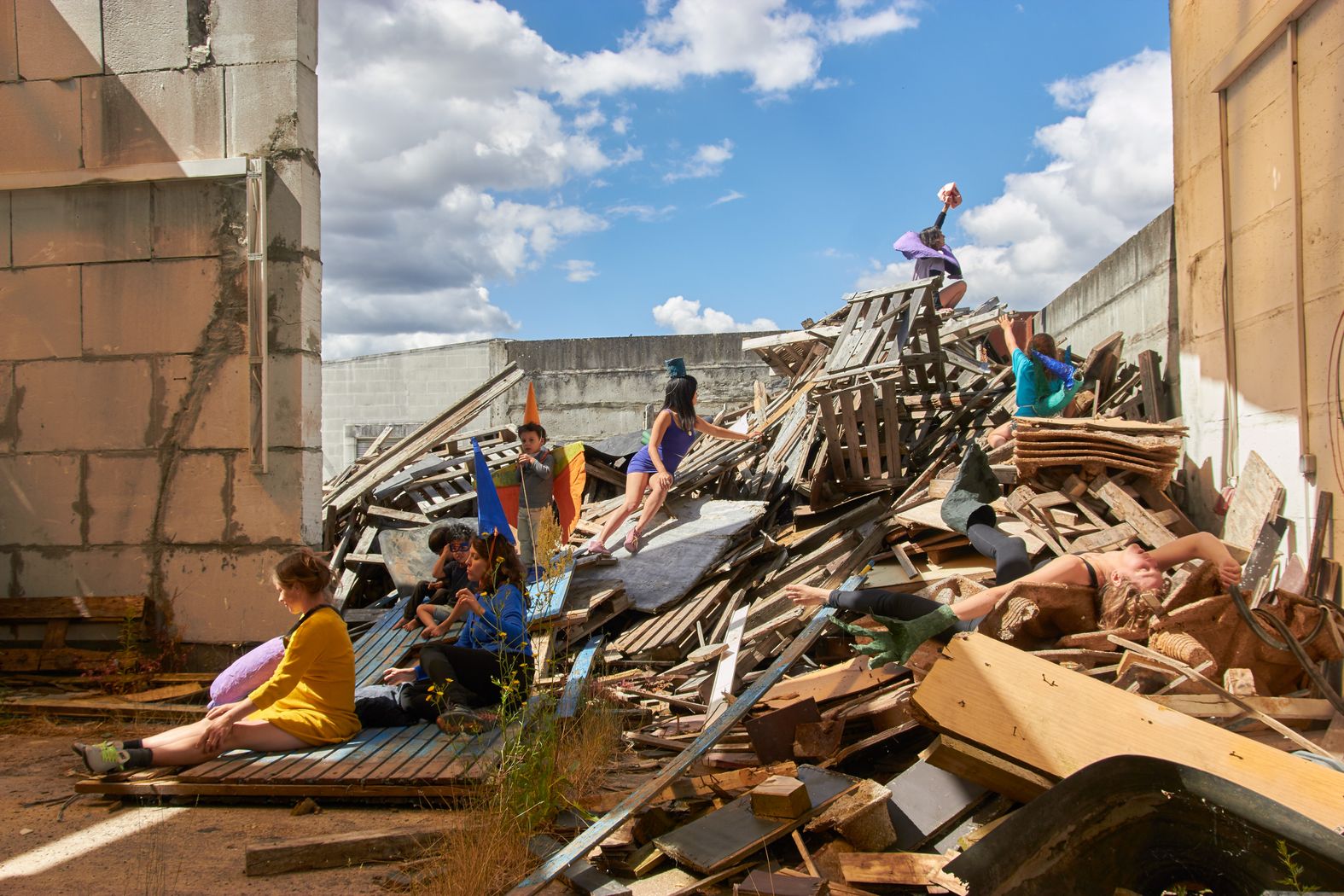 What could a school look like that seeks to make both learning and unlearning a common interrelated practice? How can a space be built around care, refuge, implication

What could a school look like that seeks to make both learning and unlearning a common interrelated practice? How can a space be built around care, refuge, implication and vulnerability, negotiating positions and responsibilities?

How can (un)learners in this space challenge privileges and habits of hierarchy, as well as authorship, productivity and competition?
#Commonings: More information and program overview

The Common Room is a prompt to experience commoning as a site of empirical unlearning. Traditionally conceived as a space in-between formal institutional life and its socialites, the Common Room will function as a space that hosts diverse practices which co-exist together, while maintaining their distinct but overlapping rhythms. However, the space also advocates for an experiment of working “in difference” and “incompleteness.” Initiated as an impromptu encounter on a Miro board between contributors of this Commonings edition, the desire to form a shared space that challenges singular perceptions of study, while insisting on the need for empirical and inclusive formats of communing was made evident.

During this last edition of the New Alphabet School, the Common Room will unfold as a ‘room’ – in its generative sense – for encounters, collective reflection, loose forms of study, rituals and altars, textile mapmaking, storytelling, performing scores, and sampling and remixing. In short, a set of rhythmicities will challenge and work through collective authorship(s) to address a guiding question: What are the commoning gestures we need to invent and what is there for us to unlearn in the Common Room?

Collected sounds and interviews with Commonings contributors and participants will be streamed daily from Wednesday to Saturday from the firefly frequencies radio platform. Undercommoning in the Remix presents itself as a radio stream and DJ Lecture that work through sampling, mixing and attentive listening. Thinking of sound as a social agitator and a subtle carrier of affect and knowledge, sampling here is employed as a practice of attuning to the unheard and producing what feels urgent to be uttered. This workshop also aims to mix and bring together whatever has been considered unfit or invalid due to a general demand for containment. Thus, how can one sonically reuse what seems unlikely, uncategorizable or inadequate in structures by inventing an uncommon remix? How can listening to it change one’s relationship to the most implicit “undercommons”?

3–4.30 pm
Play & Care: Common Rituals
Workshop in the Assembly, Hirschfeld Bar
With Maternal Fantasies and all children present
In English and German

From writing autobiographical responses to devising performances using children’s games, Maternal Fantasies bridges theory and practice to transform research on motherhood(s), care work and representation in the arts into frameworks for immersive modes of critique. For Commonings, Maternal Fantasies shares tools for commoning based on their experience working together as a collective of mother-artists and children since 2018. What does it mean to participate in art residencies, performances, and exhibitions with nearly 20 adults and children? How can artists engage children when creating artworks collaboratively? How does one manage time between care work, artistic professions and the demands and challenges of working collectively?

Participants are invited to bring along their children to ponder these questions while engaging in experiments of collective authorship. By sharing rituals that utilize voice, touch, and storytelling, imaginative opportunities for intimate connection can be created across differences in identities and experiences. At a moment when the political rhetoric of care is imbued with new urgency, these practical exercises in unlearning hierarchy act as models for inclusive art making that acknowledges interdependence.

To contest and to reject the archival practice of kidnapping, accumulation and burial of the maroon memory through a colonialist lens is the base, the backbone of Maroon preservation and survival. It is a way of existing, recreating, re-inventing and re-signifying the language of resistance that was received from our ancestors. There is no set theory when speaking from the “we” and when carrying the evocation of the memories of the Maroons.

These artistic actions happening daily from Thursday to Saturday serve to accompany the processes of repair and healing of Maroon communities, to grow like healthy trees and bear good fruit, even after the most painful storms.

Ivonne González and Paulina Marquez propose a collaboration with the Fugitive Library to produce writings and drawings (however ephemeral and changing) of the different Maroon cultures that were transmitted to them. Their intervention will establish a dialogue between the memory of the Maroon communities on the other side of the Atlantic and the fugitive being in Africa, and will be realized in Cléophée Moser’s installation with completely vegetal elements and textures.

4–6 pm
Let it out!
Activation in Conference room 2
With Jacob Eriksen and Agata Kowalewska

Participants are invited to a shouting room in the HKW building. In the intimate setting of the room, one can shout into a microphone that records it. The shouts are later played at random from the rooftop terrace of HKW through a loudspeaker aimed at the sky.

Let out the feral emotions that can’t be tamed! Whether rage, ecstasy, frustration, boredom, joy or sadness, participants are invited to release their bodily, nonverbal response or shout from the bottom of one’s throat, lungs, belly. The shouts will then be shared with the universe from the rooftop terrace.

4.30–6 pm
Workshop in the Assembly, Hirschfeld Bar
Energy as a common resource
with Counterpublics: Constantina Theodorou and Giorgos Papadatos
In English

Renewable energy infrastructures, wind and solar farms and long-distance energy grids are rapidly multiplying at a planetary scale, sweeping the last unexploited habitats of the world, endangering forms of life critical to our common survival. What does it mean to share resources that are supposedly unlimited, abundant and available everywhere, yet the infrastructures through which people can share them are practically limited, finite and site specific?

Counterpublics aims to initiate this dialogue through a workshop and collectively activated installation that will consist of small, DIY, renewable energy systems that could be used by anyone; think of electrifying a lamp or activating a radio. The energy produced will be shared according to a time schedule, an energy sharing protocol that is commonly agreed upon and under constant negotiation through informal discussions with the other participants.

There is no such thing as an innocent presence that isn’t composed of an ambiguous interplay of pregiven reality and futural projection. This exercise of moving between past and future stresses the element of experimentation present on the critical interpretation of the past. The experimental part does not try to draw a utopian future and the critique of the past does not seek to disqualify it. Rather, the sequences of thinking, memory and premonition allow one to take distance from the historical and biographical time, and position themselves between the things that either do not exist anymore or do not yet exist.

Mixing processes and methodologies from visual arts, poetry, film, philosophy and performance, this interdisciplinary workshop shares experiences and practices from very diverse artists and intellectuals. The civic art of OMNI – Zona Franca, produced with greater intensity during the last turn of the century, is the starting point for conceiving possible futures. The documentation of this work, carried out in Alamar, a failed urban project conceived in Cuba as „the city of the future,“ will be reimagined as an archive of (dys/u)topia. Through fiction, poetic image and estrangement, participants will explore the sense of a community and its temporal limbo. The resulting pieces will be impossible relics – as Chris Marker would put it: a remembrance of things to come.

In this lecture, Irit Rogoff explores the ‘Research Turn’ within art and curating and how research has moved from being a contextual activity that grounds production and exhibition of art to a mode of inhabiting the art world in its own right. The claim for the shift in one’s understanding of research is that which previously had been a form of working from ‘inherited knowledges,’ and is now a thinking about research as working ‘from one’s conditions.’ These conditions are impacted daily by precarity, scarcity, sustainability, security and financialization – which necessarily impacts subjects, methodologies and audiences of research. The centrality of contemporary art’s practices in developing new forms and expressions of research, grounded in invention and speculation rather than in proof and verification, is at the heart of this ‘turn.’ Curators and activists Gigi Argyropoulou and Rahul Gudipudi will give responses to Irit Rogoff’s talk based on their own practices.

8.30–10 pm
“The route is often associative”: on the smell of a good school
Conversation in the Assembly, Hirschfeld Bar
With Natascha Sadr Haghighian and Avery F. Gordon, moderated by Gigi Argyropoulou

The route is often associative. You smell good. You are twelve attending St. Philip and James School on White Plains Road and the girl sitting in the seat behind you asks you to lean to the right during exams so she can copy what you have written. Sister Evelyn is in the habit of taping the 100s and the failing grades to the coat closet doors…. You never really speak except for the time she makes her request and later when she tells you you smell good and have features more like a white person. You assume she thinks she is thanking you for letting her cheat and feels better cheating from an almost white person. Sister Evelyn never figures out your arrangement.

Drawing on their long experience in radical pedagogy and experimental knowledge production, Natascha Sadr Haghighian and Avery F. Gordon will have a conversation via an associative route that addresses the organizing question of this iteration of the New Alphabet School: what might a school look like that sought to make learning and unlearning a common good grounded in local specificities? They have been talking together in public and in private for many years and look forward to this conversation and the discussion with the audience.