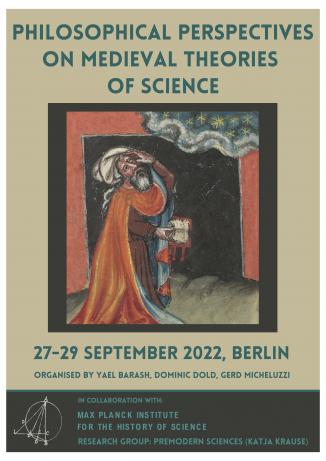 „Medieval science“ is a fascinating object of study, both when viewed as a historical precondition of the rise of ‘modern science’, and when studied because its instances provide

„Medieval science“ is a fascinating object of study, both when viewed as a historical precondition of the rise of ‘modern science’, and when studied because its instances provide important examples of significantly different, yet highly sophisticated ways of thinking. However, those who wish to study particular instances of ‘medieval science’ in light of general philosophical reflections on science from the Middle Ages will not find much help in the recent literature: no general history of developments and shifts in medieval ‘theories of science’ is available, a state of affairs lamented already more than 50 years ago by Laurens Laudan, and again recently by Ana María Mora-Márquez.

Detailed and systematic studies on medieval ‘theories of science’ are, thus, scarce. This is regrettable as a robust evaluation of ‘medieval science’ will, at least in its details, depend on the precise shape which ‘theories of science’ took in the Middle Ages. We adopt here a very broad and inclusive working definition of a theory of science as a combination of both ‘scientific methods’ and of the ways in which these ‘methods’ relate to philosophical background assumptions (stemming, for instance, from metaphysics or natural philosophy). Moreover, we understand scientific methods as ‘the different ways in which it was possible for [medieval scholars] to produce knowledge that is rational, objective, and based on evidence’, following a working definition proposed by Mora-Márquez. Such scientific methods clearly include logical tools and mathematical techniques, but also those procedural rules and practical guidelines that were upheld as rational.

Over the course of two days, we aim to hold several panels with two to three twenty-minute papers each, as well as keynote lectures of forty minutes each.

Address
This is held on site.
For the first two days of the conference, the conference will be held in the Main Conference Room of the Max Planck Institute for the History of Science. The last day will take place at Freie Universität Berlin, Van’t-Hoff-Straße 6, Meeting Room 102a.

The event is open to the public. To register, please contact MEDIEVAL.THEORIES.OF.SCIENCE@GMAIL.COM.