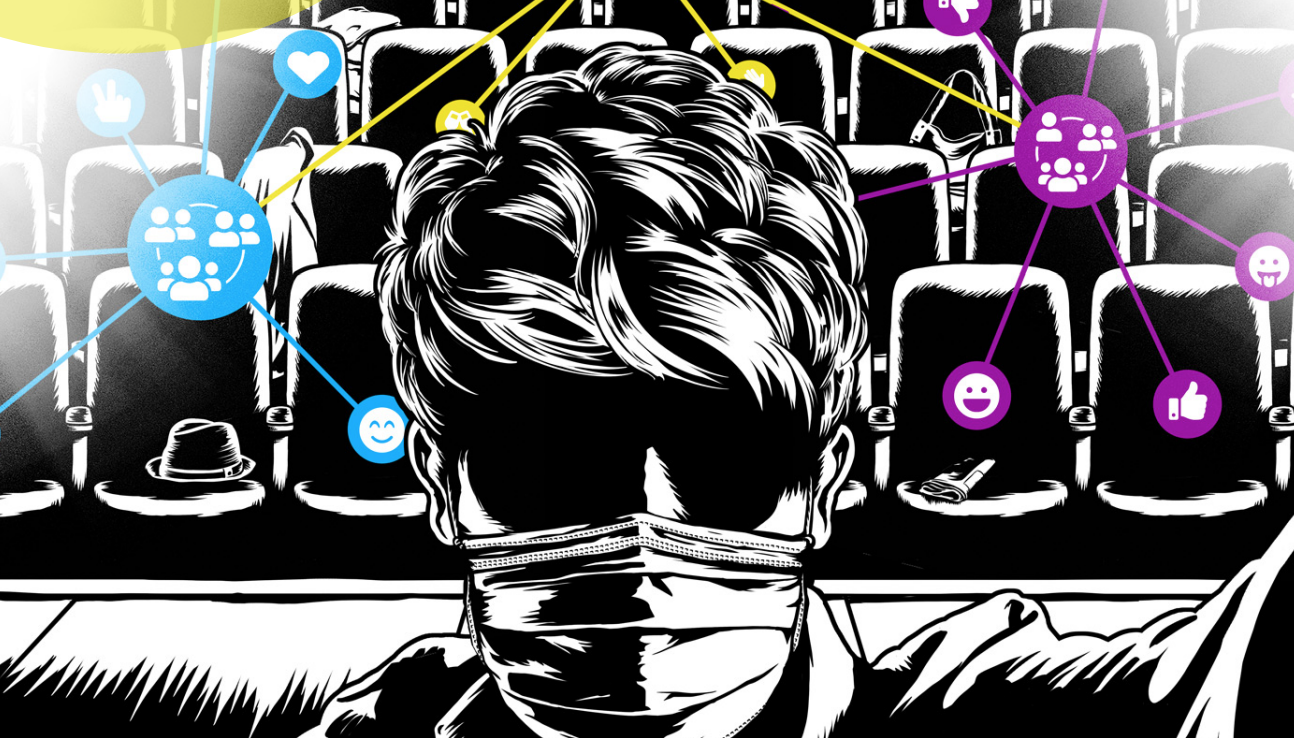 A series of events organised by Doris Kolesch of Research Area 2 „Travelling Matters“ at EXC 2020.

It was the middle of March 2020 when Germany went into lockdown. Back then, there had already been a curfew in Wuhan, China, for several weeks. In many other countries in Europe and worldwide, public life was abruptly shut down. The consequences for the cultural sector have been dire everywhere. All over the world, theaters have had to shut down unexpectedly and most remain closed. Schedules have been cancelled. Professional existences are endangered. At the same time, public and cultural life has shifted to the digital sphere. Many theatres and artists are using this way to stay in touch with their audiences and are exploring digital spaces more than ever before. But what forms of community-building are even remotely possible for theatre and the performing arts? What is the character of the relation between local institutions and these transnational spaces, which might open up and expand while national borders remain closed? What does it mean for artistic practice if humans assemble as a virtual audience while being physically alone in their respective homes? In what ways will the pandemic change theatre? What will digital assemblies mean for theatres after the pandemic?

In the series of events entitled “Temporal Communities and Digitality – Theatre During the Pandemic”, theatre directors, theatre artists and scholars from Brazil, Japan, Poland and Germany will report on the practical effects on theatre operations and their work. They will examine the various strategies with which stage and theater creators have reacted to this situation, online and offline. Together with researchers from the Cluster of Excellence “Temporal Communities – Doing Literature in a Global Perspective”, they will discuss how the global crisis of the theater has created new temporal communities and to what extent these are created under the conditions of digitality.

This event is part of our series „Temporal Communities and Digitality – Theatre During the Pandemic“. Further updates to follow.

Joy Kristin Kalu has a doctorate in Theatre Studies and is an Americanist and also currently working as the lead dramaturge and curator for theater and performance at the Sophiensælen in Berlin. Her book »Ästhetik der Wiederholung – Die US-amerikanische Neo-Avantgarde und ihre Performances« were published by transcript in 2013. She has researched and taught at the Free University of Berlin and New York University and worked at various cultural institutions in Germany and the USA, including at the Hamburger Thalia Theater, the Berliner Volksbühne am Rosa-Luxemburg-Platz, with the New Yorker Wooster Group, the Actors ’Gang in Los Angeles and the Kunst-Werke Berlin e.V Institute for Contemporary Art.

Since the COVID-19-related lockdown in March 2020, as part of her role as program curator, she has accompanied artists of the Sophiensaele in the search for translations and extensions of their projects in the digital space. She is currently gaining experience with the live-streaming of discourse and theater formats, but also with sophisticated media stagings that are often aimed at a hybrid audience, in which audience members present in the theatre are mixed with online audience members. She is particularly interested in accessibility measures that are easier to implement in digital space and allow diverse access to the program, which, in her opinion, should be adhered to even after the pandemic.

Marcus Lobbes has been working as a director, set designer and author in music- and straight theater since 1995. Collective forms of work with the ensembles and his close contact with contemporary authors characterize his artistic signature. In addition to numerous invitations and awards, his approach is also finding its way into the training of young talent: for example, he recently became a guest lecturer and speaker at the Academy of Performing Arts in Ludwigsburg, the Salzburger Mozarteum, the University of Rostock, the Mainz Academy, the University of Art in Graz, the Robert Schumann Music Academy in Dusseldorf and the Zurich University of the Arts.

From February to October 2019, Marcus Lobbes was artistic director of the newly founded Academy for Theatre and Digitality, the sixth sector at Theatre Dortmund, and in November 2020 he becomes its director.